Ability to disable or move the "asset reference" message popup

These message popups appears directly over the Design panel when you rename a file. If you rename multiple files quickly, the messages stack up and block the screen. While you can close them one-by-one, and they do disappear after 7-8 seconds, it’s still kind of annoying having them block the files at all.

It would be great if there was an option to disable these warnings, or at least be able to move them somewhere else on the screen. 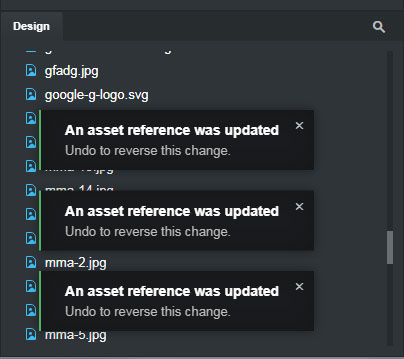 +1 I’ve thought this often myself too. I don’t want to turn them off since they give me an easy way to know what has changed when I do something, but it would be nice to have them movable and would be even nicer if they were contained within a single container that when you move one you move them all until the last one goes away and the container then disappears with it.

Looking over the app’s setup, there really isn’t a good spot for these to show up so I can see why you chose that area being it’s most likely the least used, but … when there’s multiple dialogs that pop up, as @printninja mentioned, it does get a bit overbearing when you cannot get to anything in that bottom right Panel until you close them all or they disappear.

P.S. Just wanted to say having them movable themselves would really not help much if a lot of them pop up, would really be better in a container that is resizable and movable so we can control the real estate they take up.