Hi, I’ve noticed a problem with Bootstrap studio where when importing web fonts, it only imports the top web font in the .css file? 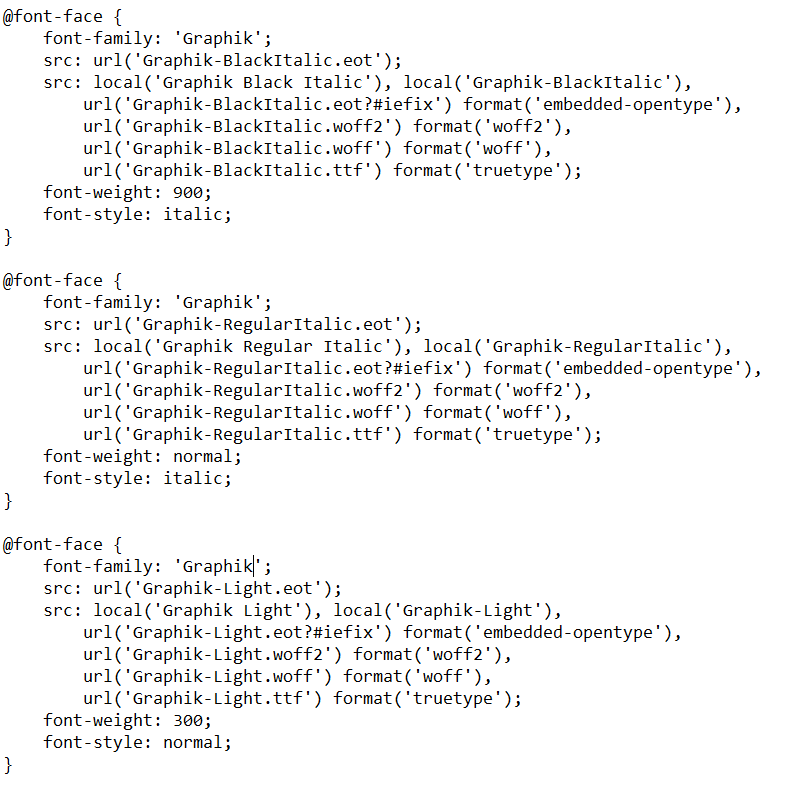 When I import this .css file into Bootstrap studio, only the 900 weight registers. I want to import the font and all its various line-weights. So far, I’ve gotten around this by changing the name of different line-weights (ie. naming the 700 line weight ‘Graphik700’), but I’m pretty sure this is the wrong way to do it.

I’m uploading my fonts by left-clicking on fonts in the design panel and clicking “import Webfont,” then selecting my .css Webfont.

Is there something I’m doing wrong? Is this a BootStrap Studio bug? What do you do when trying to import different font weights?

I recently reported this same issue and the devs said they would fix it in an upcoming update.

I do have this same issue and I’m working my way around it by having each font style (for ex regular/bold/italic) in different folders, with a different css file for each of them (each with a slightly different names reflecting the style of the font), then importing them one by one.

It’s not perfect, but it works for me!

I was in the process of doing that, but when the devs said they’d be correcting this in the next update, I just figured I’ll use a different font for the time being, and then change it when the new update comes out.

Hi guys, I’m a new user as of yesterday and loving the speed of development BSS offers but ran into this almost immediately that I started using it, weirdly mine imports 2 fonts from the css file out of about 6, I’m assuming this is still being worked on by the devs ?

Yes, the fix should be part of our upcoming release (later this week).

fantastic news, good to see you are the kind of devs that take the feedback from the user base seriously, I’ve pulled my hair out with other companies in the past!