Hello, so quick question as I’m wondering if I’m losing my mind

Has the option for ‘font weight’ within the font options in the right hand section tabs been removed or relocated in an update?

I appreciate it can still be done via the css window, but I kinda liked having that option as it was before.

All help much appreciated, thank you.

I hadn’t noticed until you mentioned it, but it does appear to be missing from the visual tools.

We removed it a few releases back, in favor of the new Style button group, which combines the most common font-weight, font-style and text-decoration properties. Only bold and normal weights can be expressed with it though, for the rest you will need to use the CSS editor. 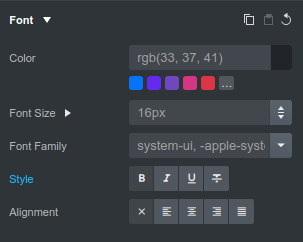 Thanks Martin, although it maybe a little counter productive when assigning attributes via the font palette only to have to move to the css window to add more specific details.
It would be nice if the ‘B’ button had more options based on the font and weights installed (ie only show the weights based on the chosen font being used) by way of a small pop-out. Oh I make it sound so simple

That said it isn’t a great hardship to edit the css, I just want an easy life.

+1 I like that idea too actually. Could add it as a dropdown even such as when you click the B, or I or any others in that row, if there are optional setttings it could do a dropdown below it or a popup as Kirby is suggesting.

I’d also like to add to that for Span, Superscript and Subscript if at all possible. I know they’re in the Components list, but being able to select text and click a button to have it automatically wrap those tags around it would be so much easier .

Sup and Sub would be great added to the Appearance tab since they basically function for text mostly. Could also be added to the Text Edit bar in visual tab, same for Span with the auto wrapping of tags.

I’m used to it of course so it’s not a make or break for me at all, would just be so much nicer if these functions automatically wrapped the tags around what we have selected when we press the button such as how Bold, Italics and the others in the Text Edit bar in the visual pane do now.

+++1 to the above suggestions.

++++1 To the suggestion. Removing this feature from the UI is problematic when trying to follow a previous tutorial. Drop downs and expands all the way.