Is the Appearance tab missing the place you choose your CSS file?

I have been trying to work this out for about 15 minutes or so to help someone on this thread: https://bootstrapstudio.io/forums/topic/deactivate-inline-css-export-without-inline-css/page/2/#post-20634

But I cannot for the life of me find a way to adjust the CSS file that the styles should be going to like it used to. It's like it's missing that part of the setup? Either that or I'm blind, hopefully not the latter of the 2 lol.

Right now it keeps defaulting to a specific file (which isn't my custom file), I think it may be the last one I installed with an addon, not sure, but it's been quite some many months since I was messing with that, and it was not like it is now when I did that. Not sure how or what to do here, but hopefully someone can take a look and see if it's missing or if it got changed.

It does show me the classes and the CSS files of current classes so I think that parts fine, it's just for creating new CSS blocks that CSS file selection seems to be missing.

I'm on Mac version in case that makes a difference.

I think you're right @Jo. Something does seem to have changed. Although I never really used it, I seem to recall that you could select from the Style Attribute drop down which CSS file you wanted your rules to go in. Now it doesn't seem to give you a choice, (or it goes into the last CSS you were using) and if you choose Choose Create CSS Block it still creates an inline style. Something isn't working right.

I don't think we've changed this since introducing the Appearance tab (ex Look and Feel). When you click the small arrow next to the Create button in the Styles tab, you see this dropdown: 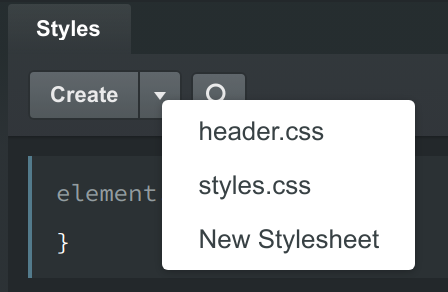 When you choose one of the files, the app sets this file to be the target of all future CSS blocks that are created. This includes the "Create CSS Block.." entry in the Appearance dropdown.

If no file has been chosen, the block will go into the first CSS file of your design (alphabetically).

I'm almost positive there was a setup like what you're screenshot shows, but in the dropdown of the Appearance panel (before when it was still Look & Feel). You chose your file there as well as within the Styles panel so you could do it either way. There's nothing in the Appearance panel at all now for that, I think that is what is messing up everyone that is new to the app that has been asking questions about it in the forums. It's very very confusing for people to set settings up in the Appearance panel, but then not have anywhere there to tell it to go to. I'm almost sure it was there before. If it wasn't, my mistake, but then ... it should be :) That might alleviate half the confusion on how to set it up. I was about to tell someone how to do this when I posted this original thread, so I went in the app to be sure since I don't use that feature often, and it wasn't there as I had expected it to be.

Seems I remember that the dropdown had the Create CSS Block, as it does now, but then you chose what file you wanted it to go to as well as the name of the CSS Block. As it is now, you can only create CSS Blocks in the last file used. For me that was almost a year ago lol, I don't even have that file in any of my projects anymore :P

Just bumping this with a bit more info to show exactly where the issue lies.

First, when you make a brand new class via the Options pane (not the button in the styles window), this is where there is no choice for which css file you want the styles to go to. It defaults to whatever one was last, with no way to change it.

Here is a pictorial view of what happens when I want to make a new class.
Keep in mind I have 2 CSS files in this project, not just a styles.css file: 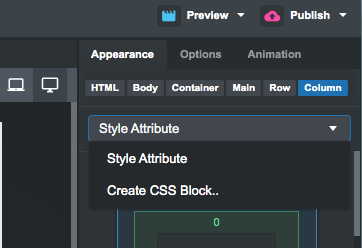 After you have created that style, and you click the dropdown to create a new CSS Block, it still only shows the one you just created to choose, along with the Styles Attributes choice and if I click the New CSS Block, it does exactly the same thing as you see above every time.

Where the issue is, is that I have more than one CSS file I should be able to choose from there, but never get a choice to choose them. It’s stuck on the “last” one chosen with no way to change it. This is most definitely an issue when you give people the ability to create a New CSS Block, it should give the option to choose which CSS file you want to use.

I am almost postiive we used to be able to choose a file from that menu in the Appearances tab (well before it was setup the way it is now for the tabs). Hopefully that clarifies this a bit and hopefully this issue will get some love.

I concur with @jo-r on this. I seem to remember it being as she described it her most recent post as well.