@martin
Would it be possible to make the Choose an Icon window resizable with a little draggable corner (see attached image) and also moveable. I have large monitors, and it would be great to be able to move the window so we could then expand it, allowing us to see many more of the icons at once. 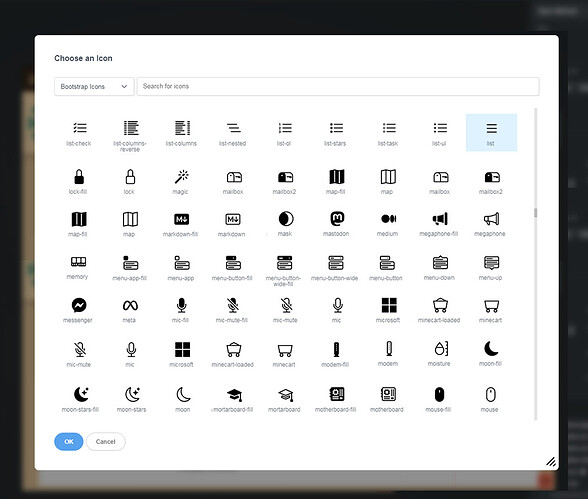 +1 That would be awesome!

I’d like to add to this suggestion as well (this is going to sound crazy I’m sure but not as bad as yesterday! lol)

Would it be possible to add a tagging system to the icons so we can add Tags to them to find them easier, or Categorize them? There are so many that can be used for multiple situations and sometimes it takes a lot of searching or eventually I have to look through them all to find something suitable. Would be nice if I could Tag or Categorize them when I finally do find them so I could get to them faster next time.

It would be something I would think that would be best done App-wise rather than Project-wise so that the tags are the same for all projects and any new projects (like the components are).

Lol - great minds think alike. I was going to add to my suggestion something along the lines of a “favorites” feature for icons, but I didn’t want to overwhelm the devs in one post. But tags would be even better.

Thank you for the suggestion! We can make the icon dialog adapt to the window size so it takes as much room as it has available.

Martin, the idea with fav icons is amazing! Pretty often we use the same icons and we have to search for them and this feature would make it much easier and faster to work on websites, it would be cool if we could make like a sets of icons, lets say we have bootstrap icons and we want to make a “set” or group of some of them and after we can select the group and pick the icon which we want to, it would be amazing honestly!

Favorites would be awesome and I +1 the ability to create sets/categories/organize in some way too.

We can make the icon dialog adapt to the window size so it takes as much room as it has available.

That could work, but I’d actually prefer to see the icon window implemented in the same manner as the color selector window, where we can drag it anywhere on the screen. And instead of having it blur the main screen out, just make it so it’s resizable.

By doing it this way, it’s possible to position it in such a way so that one can see the part of the website where the icon is going, and visualize what a different icon will look like in its place. See the example image below. I can see all the available phone icons to replace the one I’m currently using next to the phone number. 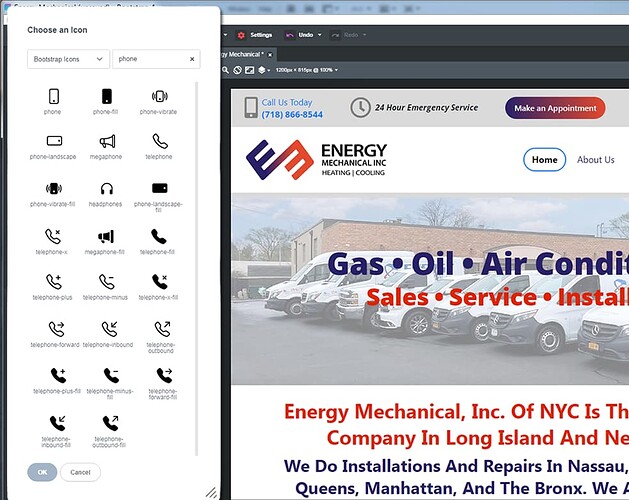