I've just updated to 5.0.2, since my prior version showed there was an update. When clicked, it brought me to the website where I could download the new version.

It also showed a message on there, to uninstall old version 1st.

Then installed the newer version. Opened a design I was working on... Shows Loading file... and the spinner keeps rotating, but it never pops up. Tried a new custom template design.

I used CCleaner to clean up cache and register errors.

This time I have to enter my license key again. So I did. Opening up a new template, won't show up.

Opening an existing design I was working on results in same "Loading file" to inifinity.

New templates are showing up when hitting Create + existing designs I made opening up in a split of a second aswell.

Sorry that you've run into problems! Can you check whether there is an antivirus system running on your machine that might be blocking Bootstrap Studio 5 from accessing your hard drive?

Deinstalled 5.0.2. Did the whole shabam again.

Deinstalled ESET, so it reverts back to Windows Defender/Firewall.

I am having the same issue but only with one of my designs, the other designs open as they should.

However it seems my "problem" design is actually open after all, it's just the loading indicator that never stops "loading".

Hope that makes sense, the problem does not seem to be intermittent, it happens every time.

I'm out of idea's (besides trying it on another PC)

@johnzeman, if possible, can you send us the design that's causing this? It will help us a lot in fixing this problem.

I would be happy to send it to you Martin, it's a 110mb file (zipped) where can I send it? Alternately I can upload it to my server and send you the link.

However things have just changed here. Yesterday after I had uninstalled version 4.58 and installed 5.0.2 I had not rebooted my computer because at the time I was doing a full data drive backup.

Minutes ago (with that backup now finished) I decided to reboot my computer to verify my problem and after rebooting and launching 5.0.2 I got the prompt to enter my (lifetime) license before the program would open. Which I did but then it just sat there showing moving dots. After several minutes of that I closed the program and rebooted my computer again and tried to register my license again but now BSS 5.0.2 reports there's an error trying to validate my license. And that's as far as it goes.

I can still send my design file to you if you want but obviously my situation has changed here.

Followup. File has been uploaded and I sent you the link to download it via your contact form.

Also the program is still not validating (or rejecting) my license it just sits there like it's waiting for something.

One more bit of feedback. I found out if I launch Bootstrap Studio using one of my recent designs then I no longer get the enter license prompt. In fact after doing that just one time now Bootstrap Studio opens as expected but I'm back to the one single design file that does not open (the one I uploaded and provided the link to).

@johnzeman we received your email but we open the design without issues on Windows 10. The other issue is due to Bootstrap Studio 4 still being present on your system and your shortcut starting it. You can just remove the shortcut.

For everyone experiencing an inability to open designs on Windows, can you try the following steps: 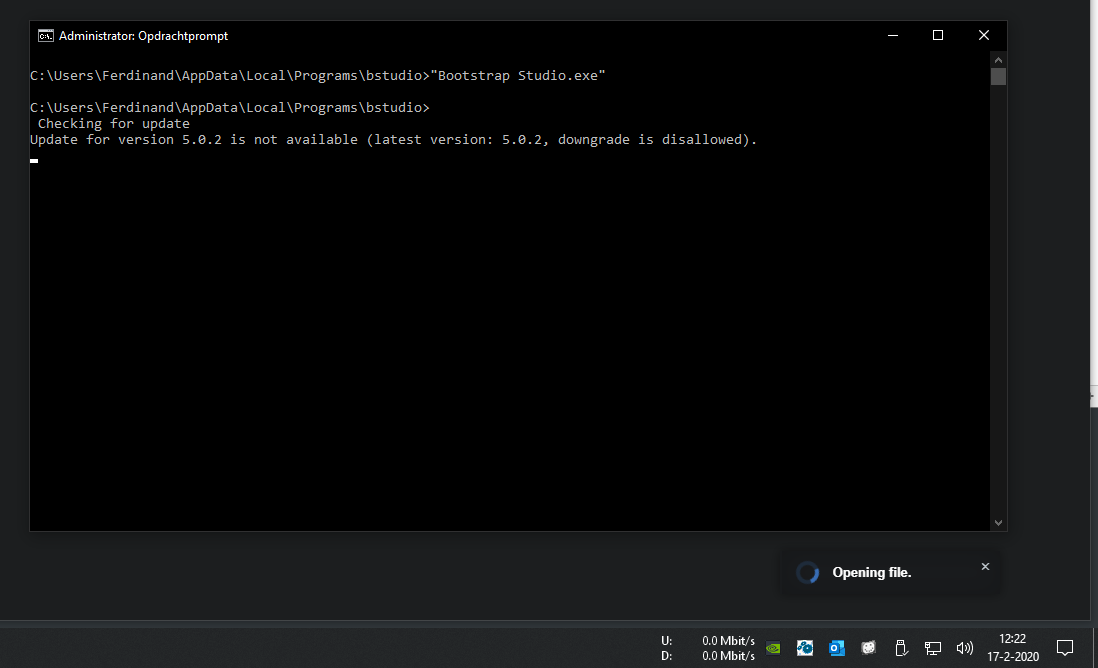 How odd. Because last Friday the very first thing I did after downloading version 5 was to uninstall version 4. Then I installed version 5.

Here's my PowerShell screenshot after following your instructions.

Silly me, I forgot to enclose Bootstrap Studio in quotes the first time.

Well I just verified version 4 is uninstalled, then I reset version 5, then I clicked the desktop icon to launch version 5, was prompted to enter my license which I did and this time it accepted it.

But I still have the same problem with that design I sent to you.

When I try to open it, it sits there "loading" forever unless I also open another design file which does open. Then I can see both designs.

I understand my next step should be to uninstall then reinstall version 5, but I need to leave for another job right now, I'll continue this when I get back.

We're still investigating the issue. The screenshots don't show anything out of the ordinary.

When I try to open it, it sits there “loading” forever unless I also open another design file which does open. Then I can see both designs.

This is good to know and points to a potential cause.

We prepared a new version of Bootstrap Studio. Can you try if it fixes the issue? https://bootstrapstudio.io/releases/desktop/5.0.2/Bootstrap%20Studio_fix.exe

Both new templates as my existing design I was working on in 4.5.8, now open instantly \o/ Thanks to your quick fix.