Just a thought, but I wonder if the forum could benefit from having an ‘up voting’ plug-in added to the ideas section for users to up-vote ideas raised. Could help devs see what members of the community think of them and if the idea is worth implementing and could help them prioritise changes if members collectively think are worth while, or does clicking the heart (liking) the OP on any idea be satisfactory

Maybe not what you had in mind but members can submit a thread which includes a poll. Other members can then vote within the thread based upon the poll criteria. 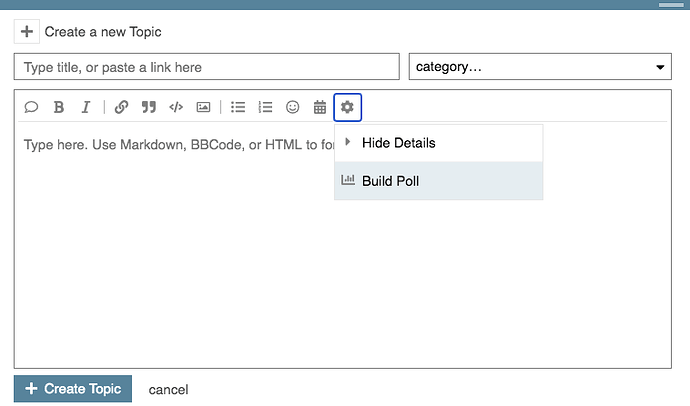 Yeah that could work I suppose but that requires users to make sure they select a poll first. Thanks for the input though as I wasn’t aware of being able to add polls

I like the idea too, would be great to be able to vote on ideas. There are a lot of great ideas that have come across these forums that are probably lost in the shuffle by now. Would be nice to safe a few from that fate lol.

There are various features within Discourse for voting and polls, for example the following.

Yeah this is what I was thinking. Hopefully the devs comment and see this

That’s an interesting suggestion. I have reservations that this might result in fan favorite ideas like PHP support getting voted to the top, which we don’t intend to ever add in Bootstrap Studio.

But maybe we can make use of Poll posts when considering what to prioritize.

Good point, but we know that you have no intention to support PHP

But a poll could also be used to ask about PHP.

It would be easy enough for one of us to flag a post that asks for PHP integration etc. for you to remove and send message to them as needed. They don’t happen all that often.

There might also be a popup message ability or plugin that you could explain that PHP will not be added and not to post requests for it, check the box to show you understand that. Could make it do it for every OP to be sure they get it.