The floating color palette window appears, and you can then click the eyedropper tool and select a color from anything on your website. This comes in handy when you want to say, match the color of text to a particular color in an image.

If the HTML/Styles panel is detached and placed on a second monitor, the eyedropper tool can no longer sample colors from the main program window. It seems the color selector is locked into the window of whichever monitor it appears on.

But it would be nice if the eyedropper could grab colors from either window, because it’s kind of useless when it’s trapped in the Styles palette on a second monitor. I suspect I already know what the devs @martin @gabby will say, which is that it can’t be done, but I figured I’d throw it out there anyway. 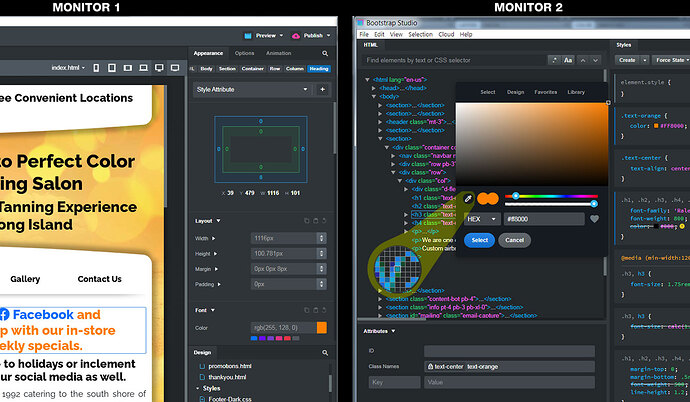 Strange, I am unable to reproduce the issue. Do others run into this?

It does the same on mine. when dragged to the other monitor I can see objects highlighting, but no cursor/eyerdopper, and if I click anywhere on the 2nd monitor it crashes BSS.

Update: If I do it on my third monitor it still hides the cursor, doesn’t crash

@martin
Okay, I was somewhat mistaken. Because the cursor/eyedropper disappears when moved to the second monitor, I assumed it wasn’t actually switching to the other window. It DOES move to the other monitor, but it disappears (in the exact way illustrated by the video posted above by @richards) so it’s still unuseable.

Thank you for the video! This appears to be a problem with Chrome’s EyeDropper API on Windows. It should resolve itself when we update Electron.