Ability to add custom HTML to other places is needed (updated)

Back in September 2020, I posted the following idea.

Other's have asked for this, it would definitely come in handy, and I can't see it being that hard to implement, so I'm humbly suggesting this as an improvement, and have even created a graphic for reference of how it might look. [enter image description here]

A new user recently posted about the inability to add the Google Analytics script BEFORE the program’s generated Head content. It’s a valid complaint because right now, BSS only allows you to add custom HTML after that content.

Google specifically instructs that the G/A script be placed right after the opening <head> tag. Set up the Analytics global site tag - Analytics Help
(This is more of an issue on dynamic websites than static ones, but it’s still a valid concern, and I can’t see any harm in being able to put the code where we want.)

I’ve created the below mockup for a suggested way to solve the issue without a massive change to the BSS UI. Obviously, only one toggle switch could be selected at a time, since each would be displaying a different part of the code. I think this, or something like this, is now a necessity. There are other topics in the forum where people have requested the ability to add HTML to various places other than after the head content. @martin @gabby 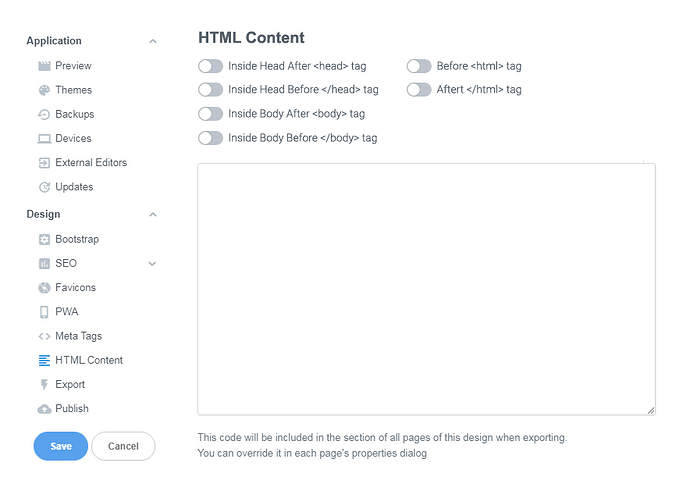 +1 whilst I can work around this post export, having the option to support this natively will save lots of time for sure.

Giving this another bump, since I’ve got clients asking for various Google code to be added to websites, and Google is now specifically requesting that their tracking tag be placed BEFORE the closing </head> tag on the pages, which we cannot do from within BSS.
@martin