You can now mark components as Favorites. They will be shown in a new group near the top of the Studio tab. Just right click a component and choose “Add to Favorites”.

Better support for CSS variables. You can now see the theme’s defined variables beneath color fields in the Appearance panel. Variable color previews are also shown in the CSS editor and the color picker.

You can now Preview online components. Just hover over the component screenshot and click Preview. A new design will be created and the component will be inserted, without having to download it first. This doesn’t count towards the component’s Download numbers and won’t affect its popularity. 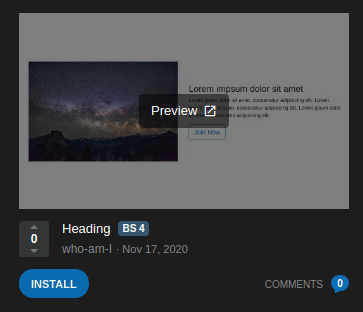 We’ve also made a lot of improvements:

…and did quite a bit of bugfixing:

As always, we look forward to your feedback and we hope you enjoy these new additions!

I love that all

Can’t wait to start exploring all this over the next few days! Best Software Development Team on Earth!

How does the 5.5 release of BSS choose the order in which components marked as “favorites” get listed. At first I assumed it was alphabetical, but when I added “link” to my favorites, it was placed first, at the top, ahead of “column”, “container”, “div”, etc…

It would actually be nice if we could shuffle them around to whatever order we want.

+1 for being able to rearrange the Favs, I hadn’t even realized that till you said it. Definitely need to be able to do that. Preferably drag and drop rearranging so we can put them exactly how we want them, would also be nice to have basic sorting as well for those that just want to resort them.

Also great job so far on the updates, haven’t played with all of them yet, but so far what I’ve seen has been good! Thanks!

There’s noticeably improvement with each Upgrade. 5.5.0 didn’t automatically Install and when manually downloaded didn’t pick up my registration

However 5.5.1 has just Installed automatically on reopening after the Notification and it picked up the registration first time opened. Thanks, keep up the good work,